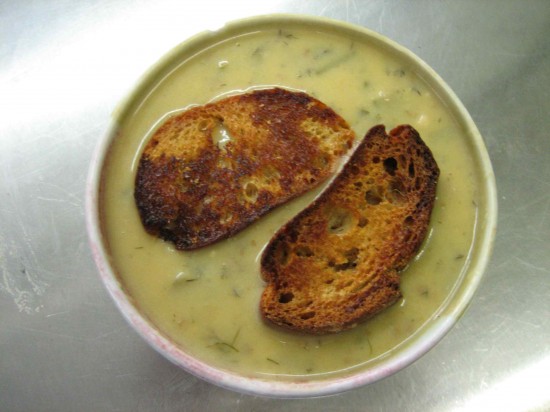 Whether it’s pronounceable or not, this soup (compliments of Rick Field of Rick’s Picks and found on page 36 of Edible Brooklyn: The Cookbook) is a real winner on crisp autumn days.

One of Brooklyn’s first and most successful farm-friendly picklers—his products are now in Whole Foods nationwide— Rick Field admits to two passions beyond pickles. The first is alliteration, hence the catchy name of this hearty dish, and the second is soup, which he makes every weekend, brown bagging the leftovers to work. Many of his favorites are ultracheap concoctions made with pickles, naturally, and also potatoes: He recommends creamy German butterballs for this dish (especially those from farmer Bill Maxwell, who works the same Saturday farmers’ market outside Park Slope’s Prospect Park as Field). “Quality potatoes, when they are cooked down and blended in a food processor or with an immersion blender, will lend a natural creaminess to a puree or ‘cream of’ soup that usually eliminates the need for fatty cream itself while adding more flavor,” says Field. This particular creation proves his point. The brined croutons in this recipe are another tasty surprise and not something you find often in recipes. You’ll want to use them on salads and in other dishes too.

1 To make the croutons: Preheat the oven to 450°F. Melt half a stick of butter in a sauté pan over low heat. Add the brine from the pickled red peppers, making sure to include a few bits of spices from the jar if there are any, and whisk together till smooth. Brush each of the rounds of bread with the butter-brine mixture on both sides, place on a nonstick baking sheet, and bake for about 5 minutes, turning once, until nicely browned on both sides. Remove from the oven and place on a baking rack to cool.

2 Heat the remaining stick of butter in a stock pot over medium heat. Cook the onions for 5 minutes, until they begin to turn translucent. Add the potatoes and cook for 5 more minutes over medium heat, stirring constantly. Add 1 cup chicken stock to the pot and stir well, scraping up any bits that have stuck to the bottom. Cook at a simmer, uncovered, for about 15 minutes, until the potatoes begin to soften. Add the remaining stock, the lemon juice, and black pepper to taste.

3 Add 2 cups of milk, reducing the heat to low and the pot to a slow simmer. Add the strained dill pickle brine and stir well. Puree the soup with an immersion blender or in batches in a food processor. Add the chopped pickles, dill, and chives, stirring to incorporate. If the soup is thicker than you like it at this point, add milk to taste. Cook for 5 more minutes over low heat, and turn off the heat. Serve in wide, deep bowls, topped with croutons and freshly ground black pepper.

Good Stock Soups Wants You to Sip in Summer, Too

From Kimchi to Tempeh, These Are 6 Local Fermented Products We Love