What more could be said about oysters, and why they are the perfect Ingredient of the Week? For New Yorkers, the case for slurping Crassostrea virginica—not just during Eat Drink Local week, but year round–is historical, economic, ecological, cultural, as well as gastronomic.

Kurlansky told of a time when oyster beds thrived just off the shore of Manhattan, in New York Harbor, and how Manhattan grew on the piles of oyster shells disposed of in New York City trash. A century ago, oysters constituted a significant freight hauled by the Long Island Railroad, with four train-lengths full moving from Long Island to Grand Central daily. To this day, the Grand Central Oyster Bar boasts one of the most impressive ready-to-eat oyster menus in the country, if not the world—a testament to the appetite locals still have for this mollusk—and generally as much as one out of four of the offerings are from New York waters. (See “A Note on Oyster Safety and Oyster Aversions” at the bottom of this post.)

It’s no surprise that of all our Seven Ingredients, oysters were embraced by nearly every Eat Drink Local chef from Manhattan to Montauk, including the North Fork Cornell Oysters with cucumber and mint mignonette at Fresno Restaurant in East Hampton (many partners, like Elsewhere in Hells Kitchen, opted for a strawberry-chive mignonette), the Island Creek Oysters in a green garlic broth at Gramercy Tavern, and the crispy Bluepoint oysters with Liberty Farms pea shoot salad with chive remoulade at James in Prospect Heights. 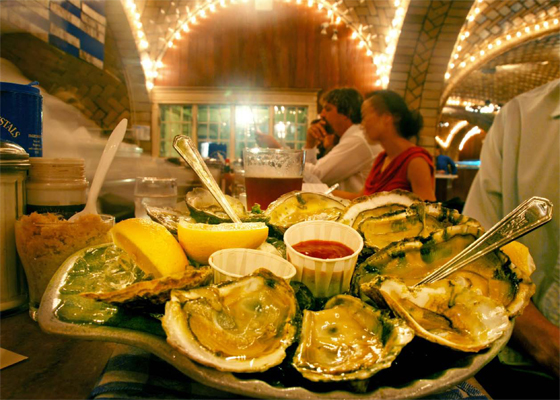 Whether at the Grand Central Oyster Bar or at our partner restaurant menus, local oysters are abundant. Photo by Edible Manhattan, Brooklyn and East End publisher Stephen Munshin.

New York oyster production is off its historic highs, but there is a resurgence based mostly on small-scale aquaculture entrepreneurs, whose numbers are growing hand-in-hand with the ranks of micro-distillers, artisanal ice cream trucks and hand-packed pickle makers. The resurgence is also propelled by the fact that restoring oyster beds may be one of the most cost-effective options for improving marine water quality, as mollusks reduce excess nutrients and other coastal pollution as they gobble tiny plankton. (See the explanation of this ecological role at 3:38 in this video.)

A couple of years back, Rowan Jacobson, author of the James Beard Award winning A Geography of Oysters, took an oyster sleuthing tour for Edible East End of the latest generation of men and women who are raising the mollusks in the Peconic Bay and Long Island Sound. The result was a snapshot map of the “Oysters of Long Island.” Jacobsen’s story includes some incredible history, including the story of the rise and fall of the still-ubiquitous Bluepoint oyster.

We’re glad to report that all the growers in the map are still in biz, and more oyster brands have cropped up. There’s Chris Pickerell (a marine biologist for Cornell Cooperative Extension on Long Island) who is raising oysters and has launched a popup oyster bar for wineries and special events. And attendees on North Fork Experience tours get to visit the Cornell Marine Center in Southold that has helped inspire not just oyster-growing entrepreneurs, but also amateur oyster gardeners, who seed the bay (and reap its briny benefits) as part of SPAT program (Southold Project in Aquaculture Training), which enlists citizens to grow scallops and oysters and reintroducing them to local waters.A few years back, Johnathan Smith launched Shinnecock Oyster Farm in Shinnecock Bay, piggybacking on and augmenting oyster growing efforts on the 800-acre, water-surrounded reservation. As Karen Ulrich writes, “Years ago, says Jonathan Smith…the Shinnecock used branches to which young swimming oysters (Crassostrea virginica or the Atlantic oyster) would attach. Once secured, the branches full of bivalves were brought closer to shore to “farm.””

And at Shellfisher Preserve, a shellfish hatchery on Peconic Land Trust-owned working waterfront in Southold, oysterwoman Karen Rivara, who has helped propel the local industry by organizing several coops and raising seed oysters for fellow growers, is now harvesting Peconic Pearls (chronicled in the latest issue of Edible East End), an up-and-coming oyster brand from the region that shows up regularly at the oyster nights hosted by Jimmy’s No. 43 in the East Village. (Jimmy’s has an oyster party tomorrow night, June 30, to help close Eat Drink Local, if you haven’t already heard.)

As Jacobsen notes, “Long Island history abounds with oyster names that caught fire and quickly vanished in a conflagration of overconsumption: Rockaway, East River, Saddle Rock, Shelter Island. Huntington Bay yielded a trove of exceptionally tasty morsels in 1859, and was instantly picked clean by every oysterman on the coast. To see illustrations of that frenzy, depicting 215 oyster sloops packed cheek-by-jowl in the small bay, is to witness the Tragedy of the Commons at work.”

The name, Bluepoint, migrated from the Great South Bay (after the collapse of what was once “a 23-mile uberbed”!) to Long Island Sound and even up and down the East Coast, to the chagrin of Long Island oystermen. Today, Frank M. Flower and Sons is one of the primary suppliers of true Bluepoints, harvested mostly around Oyster Bay.

“A hundred years ago, after the prodigious oyster beds of the Great South Bay were destroyed,” writes Jacobsen, “the East End waters took up the slack, harvesting mountains of oysters from the clean waters of Greenport and Shelter Island. The oysters were as sweet as could be, and grew justly famous. In 1936, the Brooklyn Daily Eagle called Greenport “the heart of Long Island’s famed oyster industry.” At one time Greenport hosted 30 canneries churning out tinned oysters.”

In contrast to the wild harvesting of old, nearly all the oysters coming from Long Island today are raised in “rack-and-bag culture, [using plastic or] metal cages submerged in just a few feet of water, just offshore, accessed by small skiffs.” (Oysters labelled Mecox Bay, where there is a surprisingly robust wild population in the shadow of oceanfront mansions, are a notable exception.)

Still, Jacobsen suggests that despite the shift in production method and exact location, since the bay bottom remains largely the same, New York oysters look and feel very much like what Gothamites might have shucked and sucked two hundred years ago: “Remember the distinctive New York license plates of the 1970s and 1980s, burnt-orange with black lettering? That look lives on in Peconic Bay oysters. (If you don’t remember the plates, think Cincinnati Bengals instead.) Some orangish local algae may be responsible, or it may be the brood stock. Long Island freshwater is known for its high iron content, so perhaps some of that iron seeps into the bay and affects the look and taste of the oysters. Certainly once you start imagining the look and smell of a hot, rusty cast-iron pan, you notice it in the oysters—a metallic touch that enlivens the tongue. Cooks rave about the full and piquant taste cast-iron pans impart to food; perhaps the Peconic Bay does the same thing.”

To see the special menus incorporating this and the six other Ingredients of the Week that were created by our partner restaurants, check out our Eat Drink Local restaurant guide.

A Note on Oyster Safety and Oyster Aversions:

Despite the fact that oysters come raw, grilled, cooked in soup, baked in pies and stuffing, and in an endless range of other delicious incarnations (see our restaurant partner menus for proof), there are those refuse to eat them. When the plate of just-shucked ollies are passed around, there are some people who will pass. We aren’t the type to judge, but we will argue that such aversion is purely subjective and based in personal squeamishness, rather than any rational concern about the safety of oysters.

I am proud to say I’ve never gotten sick from an oyster, but my wife and other oyster-eating friends have. Chefs, marine biologists and medical professionals have told me the following about illness from oysters:

2) It is very person-specific; that is, at an oyster party where a few hundred oysters are consumed, just one person might get sick (from just one bad oyster) and the same oyster might not make another person sick;

3) Long Island oysters are safe to eat even in warmer months, although there is more bacteria (and other things) in the waters during that time, so precautions might be taken;

4) When in doubt, refrigerate the raw oysters overnight (which should kill any harmful microbes) or simply cook them.

The Fifth Ingredient of the Week is… Local Lamb

Alice Waters Knows What’s Up; She Just Subscribed (Do it this Week and We’ll Give the Proceeds to GrowNYC)

Taste Cocktails of the Future at Food Loves Tech

Here’s How Gramercy Tavern Does a Pop-Up Brunch