I’ve been obsessed with ceramics for as long as I can remember. My childhood kitchen was filled with Mexican red clay dishes and hand-painted Talavera from Spain, brought home from family trips abroad. In our hippie town of Santa Cruz, California, there seemed to be a pottery studio on every corner. For years, I’ve hunted for affordable pieces to add to my prized collection of 1970s French stoneware by Pierre Digan, whose work now sells for thousands of dollars on 1stDibs. So it’s been exciting to discover all these incredibly talented ceramicists in the Hudson Valley, local artisans who have contributed to the thriving makers’ movement.

They are part of a long tradition of American studio pottery with roots in the folk potters of the Southeast. Ceramics were also integral to the Arts & Crafts movement that flourished between the 1880s and 1920s, which advocated local materials, a reverence for nature, and simplicity in design. At that time, handcraft was seen as a means to leading a more meaningful life, much as it is now. The ceramicists I interviewed for this piece have been spending more time in the Hudson Valley due to the pandemic and they all expressed a richer connection to their craft and to the land around them. The work they produce is deeply personal, imbued with meaning, and built to last.

All In The Family

Originally based in Brooklyn, Henry Street Studio, founded by mother-daughter team Loren and Aliza Simons, is now operating out of a converted barn in Chatham, NY. Guided by a shared visual language, the duo works in collaboration—every piece is touched by two sets of hands—to create ceramics intended for daily use. “The narrative starts with us but continues to evolve over time as a piece acquires patina and becomes a favorite,” says Aliza, a self-described chemistry nerd who formulates all the glazes.

Their work merges art and function, exuding a Shaker sensibility that displays a reverence for simple forms. “Our ceramics are not precious,” says Loren, though the high-fired porcelain and stoneware pieces are beautiful enough to turn every day into a special occasion. Loren’s husband, Josh, a sculptor and a painter, has joined her and Aliza in the studio to make larger-scale vases and sculptures (amusingly referred to as “dad pots”). Son Casey, a photographer, creates the imagery. They all put a lot of artistry and passion into their work and enjoy thinking about how it will go on to acquire new meaning in the hands of others. 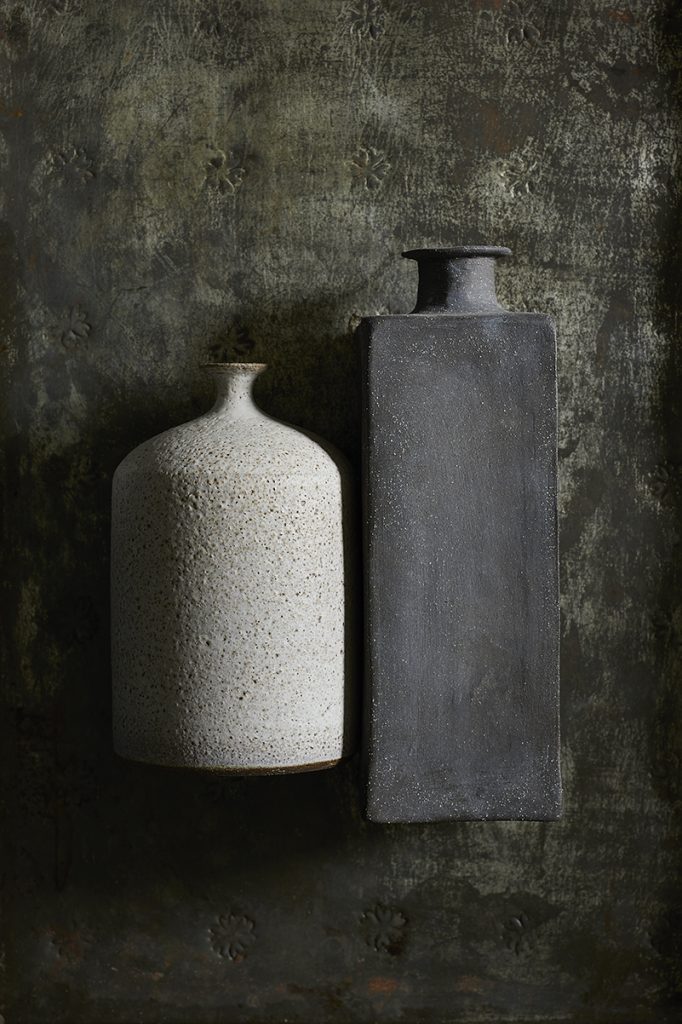 Margaret Braun still maintains her New York City pottery studio (with a kiln named “Beatrice”) on 47th Street, right cross from her friends at Sullivan Street Bakery. But the baker-turned-ceramicist, whose fantastically sculpted cakes were inspired by everything from Byzantine mosaics to Gaudí, has spent much of this year playing with clay in a repurposed toolshed next to her “hobbit home” in Phoenicia, NY. And she likes it so much, she’s investing in another kiln for this studio. Margaret’s ceramics clearly spring from an artist’s vision and a confectioner’s hand. They are both quirky and meticulous, overblown and restrained, crafted with techniques that betray her culinary training: She flattens her clay with a rolling pin and pipes adornments by hand. She describes her work as having “a shipwrecked quality,” and it often does seem to defy gravity. “How a piece looks dictates its place in the world,” says Margaret, who doesn’t value utility over decoration (as per her frequently used hashtag, #functionoverrated). This means the purpose of her delicious ceramics—dinnerware or objet d’art—is in the eye of the beholder.

Nonna Hall’s journey has taken her from Turkmenistan to Siberia to Moscow; then, to Texas, Brooklyn, and, ultimately, the Catskills. Along the way, she collected the inspiration and influences reflected in her richly eclectic work, which she calls “Nonneta’s Keramika.” At Nonneta and Friends Creative, her studio/gallery in Barryville, NY, she makes her ceramics, teaches group and private classes, and showcases art by friends from around the world.

“Every lump of clay is so full of possibility,” says Nonna, “and I love discovering its unique identity, its special story.” Whether working by hand or on the wheel, executing her own vision or infusing it into commissions, each piece is an extension of herself that continues to evolve as it passes from one set of hands to the next. She prefers stoneware for the way it reveals the natural beauty of the clay and uses underglazes to explore layered colors. Fascinated by the traditions of the Central Asian kitchen and by the ceremony of tea enjoyed in places as diverse as Russia and Morocco, Nonna transforms domestic staples into beautiful pieces clearly destined to become family heirlooms.