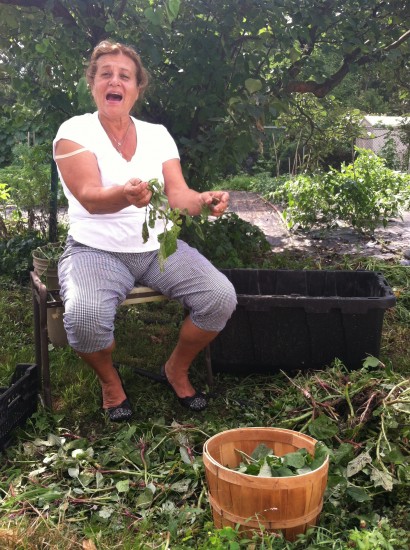 The image of tossing and watering seeds in perfectly plump green field, wearing a trendy straw hat and carrying a basket brimming with colorful fruits is enough to turn almost anyone into a farmer. The reality is hair green with pollen, dirty finger nails and an achy lower back at the modest age of 23. Manicures are a memory long forgotten. As Marilee Foster can attest, slender sundresses are but a fantasy when you’re knee-deep in manure on a 90-degree day.

When you go into farming, you leave many luxuries behind. For example, standing upright for the majority of the day. Or perhaps even sitting. Nevertheless, farmers everywhere push through the heat reminding themselves of the satisfaction of the juice of a freshly harvested watermelon dripping from the wedge onto their sun-kissed cheeks. That is, until their moment is ruined by the realization that weeds are taking over the kale patch.

Weeding is one of the wonderful tasks of farming that most farmers are happy to hand over to the nearest willing volunteer. Organic farming, especially, can mean tugging and plucking for hours on end. Most weeds are composted. Many are cursed. Some are even stomped on. However, there are few that are cherished such as vlita.

Greek for amaranth, vlita a nutritious and native weed treasured by Greeks like the Bolkas family of Thera Farms in Ronkonkoma. The bushy 3- to 10-foot plant is a welcome annoyance on their two-acre farm. After hours of weeding and a broken back, you better think twice about throwing away this super weed. Especially if Mrs. Bolkas catches you.

“The Greek people go crazy over this stuff!” she says, sorting through a wilted pile of the red-stemmed greens. “They drive very far to find farms that grow it!” While the vegetable rows may look immaculate, the job of weeding on Thera Farms doesn’t finish until she gets her amaranth.

Amaranth’s highly sought after seeds are high in protein, amino acids, fiber, iron, potassium and vitamins, making it a nutritious substitute for grains. Its edible stem and leaves have healthy heart and kidney benefits and a sweet flavor similar to spinach when cooked. It is easy to harvest and can be identified by its notched green leaves and red color at the bottom of the stem. Simply pull and wash, but don’t trim too much as the red part is tastiest.

Be cautious of the spines on the leaves of some species, but do not fear, for amaranth is not poisonous. It thrives in nitrogen-rich soils, which may leave trace amounts of nitrates in the leaves, so it must be cooked. Mrs. Bolkas recommends boiling, straining and letting it cool and then tossing it with olive oil, raw garlic, white vinegar and salt and pepper for a tasty summer salad.
While you’re probably still not eager to go out and weed for the next day and a half, know that if you do you might stumble upon this famous wild edible. If you can’t find it in your own yard, you can get some from Thera Farms, either at the farmers market or right from the farm. Put on your sunscreen and go get some dirt under your fingernails. There are weeds to be eaten.

Liz Clayton is a writer and photographer living in the Bedford-Stuyvesant section of Brooklyn. She is co-author of a world guide to the best coffee places to be published by Phaidon in July, 2017.

Reducing Farmer Debt, No Meat for the German Government and More of the Food News You Need to Know This Week